A well known anchor and couple of singers came to USA to celebrate the um…I don’t know but something about Telengana.

I didn’t get to snap a photo or two with them because they were moatly on stage. A few times (very very very few) they were behind the curtain, I was way at the back of the hall.

She played a game with the audience where she throws a ball at someone in the audience while there is music playing, whoever has the ball has to throw it around and whoever has the ball when the music stops will have to go to the stage where she makes them play another kind of game. She did for five times so there are five people on the stage. For one of those four rounds (either 3rd or 4th…don’t remember as I was very nervous), the ball was thrown at me by some man who was in my row. Oh my gosh!! I was really scared! I was looking at her…I didn’t know what to do but stood up and was starting to walk with my bag (very awkward but my uncle wasn’t with me to give the bag to…contained wallet, phones, and other very important things). But thank god, she asked the man who threw thd ball at me to come onto the stage. I didn’t pay attention to when the music stopped whether when I caught thd ball or when it was on its’ way towards me or when the guy caught it. I was very nervous to pay attention to anything!!!

The game on the stage was they had the music on and when it was stopped, those five people were supposed to freeze in whatever position they were in at that moment. The anchor said statue at them, at which point the music was stopped, and the dudes froze. It was hilarious! One dude kept “freezing” a pose a couple of times, she noticed it and told the audience…together we had a good laugh. But that man, now intentionally, kept on “freezing” at “his” pose because the anchor caught his attention!! To be honest, everyone (most of them men) came to see get, the anchor. No one really cared about those singers!! I tried to listen to what they were singing, but I had no idea what those lyrics meant even though they were in my language. They do have a a good name in the film industry in India. Like I said, the anchor was the only reason people came to the program. Also, I just don’t understand any poems in my language…it has been almost ten years since we moved to the US. They use a different kind of vocab than the one I know. Especially these Telangana people’s vocab is different and weird. I don’t follow any politics in India…I was too young to understand it when I used to live in India. I don’t even know what Telangana is or what it stands for or the story behind its’ creation. If I want to learn about government and politics of India, I will have to start from Kindergarten. Now you know my knowledge over India’s government and its’ affairs/politics. This doesn’t mean I am full of info about US government. Nope, but I do know a fair amount obtained from middle school, high school, and college. I know more about US history tgan India’s. I will have to learn at least history of India if not about government. Anyway, enough about thys matter.

I took some pictures of the anchor using my iPhone, they are of bad quality. She kept moving and thete were bunch of kids on the stage dancing. It was she who called those kids onto the stage. There weren’t enough gifts to give to them for coming on to the stage when called to entertain the audience. They were disappointed but some who gotto tell their names into the microphone were happy.

To be frank, neither the anchor nor the singers are my favorites but I just love seeing TV person in real life. It doesn’t matter if I like them or not, just seeing them in person is exciting and thrilling!!!

Lastly, I don’t know if I can upload pictures on here because mine is not a premium account. I am typing this post using my iPhone and it is past midnight. I will see if I can post them on here when I get on a computer tomorrow.

P.S. Please ignore any spelling mistakes, it is really hard typing a post on an iPhone. I will correct them tomorrow. I just wanted to share my excitement with you all!!

It is not quite Wednesday here yet, it is 11:49P.
But anyway, gave me a good laugh!! Thanks for sharing Jenni! 🙂 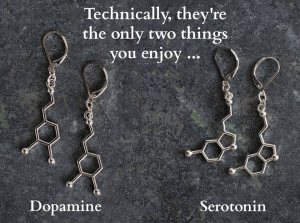 Image courtesy of IFLScience which is one of my favorite sites.

Gave me quite the laugh when I thought about it.

If you’re interested in an interesting piece of jewelry here are the links for the Dopamine and the Serotonin earrings.